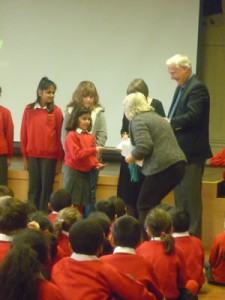 Prize giving by Tony Allen and Sheila Reid of HEA

It was a very exciting day for me because it was my Diamond Jubilee. It was said that Phillip wasn’t here but I am sure that things will cheer me through my journey. I quickly got dressed in my bestest clothes and then I set off.

My first event was at the River Thames. I went on a boat called the Royal Barge. It was hard for me because I am 86 but I handeld it. I was happy because I could see a lot of smiling faces that could nearly never end. I could also see a lot of flags in patriotism it reminded me of Phillip.

After that I went to Buckingham Palace. I switched on the TV and I saw the Jubilee concert I thought it was impeccable. It was also unhappy because I missed a bit but at least I came. I could see more flags waving at me and cheering. It was getting more and more fasanating. I sat on a chair and saw a lot of people singing and dancing or playing music. The music was either pop rock or classic.

I[t] ended with a fantastic finesh. I thought it was amazing. Lots of fire-works threw up in the air with the last song playing. It was a James Bond song. Then I had to stand up and put [on] a precious sparkly diamond. I put that shiny diamond on a varse and then the diamond went down. I didn’t know what was going to happen and then [at] that moment a bundle of flames shot up in the air lots of music was on. Everyone was singing with the songs. After the concert had fineshed everyone was clapping and cheering. I went home.

The next day I went out for lunch but I had to go home very soon this time I went home in a chariot. William and Kate went in a different one. The chariot was glories gold and rich royal. I got to Buckingham Palace.

I woke up in a great mood but as I glanced out of the window it was raining. Despite the weather everything was going well so far. Today was the day of the River Pageant and the concert. I just can\t believe I have been ruling as a monarch for sixty years. It is the second longest reign against Queen Victoria with sixty four years on the throne. After having my Jubilee breakfast it was time to do my teeth and get changed into some suitable clothes for the damp wet weather. I chose a warm smart jumper, a pair of waterproof trousers, posh wellies and a coat for my body to keep warm. Also socks and my underwear.

My wife and I were both ready for the River Pageant, we stepped outside and got into the limozine and set off for the River Thames, we saw the whole of London. I felt so clam, but nervous because I was the representor of the Commonwealth and every person counted on me to be a great ruler. I’m proud to be the king of countries for a day. As we arrived at the River Thames the flotilla was there looking spectacular, this was going to be great. We just had to park the limo somewhere. Once we found a space I climbed out of the car and walked merrily down to the Belfrey. I thought the ship looked wonderful as I sat down on the ships sofa under the protection roof over my head. The water was tranquil as the ships smoothly moved across the River Thames. I really enjoyed the River Pageant as all of the royal family with my wife and I had a good talk about the world and poorer countries and how they’re trying to help them.

It is now lunch time and I am eating with seven thousand normal citizens and some royals and presidents and prime ministers from most of the countries of the Commonwealth. As I sat down in the lunch room I could see the look on the citizens faces as they ate the scrumptious food I talked to a citizen they told me this “I am very proud of being brittish and my dad is fighting in Afghanistan, he respects his country and his ruler and is an inspiration for me”.

After lunch I went back to Buckingham Palace to get ready for the concert tonight. It was at six o’clock when the limo called us to get into the car. The journey took five minutes and strangely when me and my wife stepped out of [the] car it stopped raining. The concert was astounding, all of the fireworks, the signing and Madness on top of Buckingham Palace. The thing I enjoyed the most though was the Commonwealth song, it was very touching and I just can’t imagine that Gary Barlow composed that song all buy himself.

It was the end of the concert and we were driving home (Buckingham Palace) when I thought how wonderful it is to be a ruler but nervous as well. This has been an amazing experience for me and for everyone today as well. I personally think that this is the best Diamond Jubilee ever (out of the two).