I remember the day I was crowned “Queen of England”, it sounded so grand! It is hard to believe I have been reigning for 60 years. I still can’t get over the fact that I am second longest reigning monarch. My great, great grandmother rules for 64 years, her name was queen Victoria, she is the longest ruling monarch. I have had many Diamond Jubilee celebrations over the last few days.

On Saturday, there was a horse-racing competition, this I thouroughly enjoyed, expecially when my horse was winning. I couldn’t wait to find out who won the race as they were all speeding down the track.

Next, on Sunday the Thames Jubilee Pageant sailed out. It was a magnificent sight to see. The royal barge was studded with sculptures entwined together all in gold. I wore a collection of clothes designed by my royal courtier, Angela Kelly. This included a dress, coat, hat and shawl There was a range of historical and
modern boats and they were all split into five sections while music played through the procession. There were millions of people coming to see the floatilla and their queen (so many supporters)! I was visibly delighted when I saw a life size model of “War horse” as we passed by the National Theatre. There was a gun, navel cadets and veteran salute abourd the HMS Belfast. I was stunned when the bridges went up all the way; this was something spectacular as they had never been upright. All the nations of the Commonwealth were here sailing with a tribe in their own individual boat with their countries flag waving in the air.

The time when I could relax was at the concert. The blaring music was from some of the greatest popstars. There were vibrant colours and when the fireworks came.. They were vivid so energetic. So energetic!

Last of all was the thanks-giving speech and the appearance on the balcony. Yet again there were loyal fans waiting for me and as this was my last Diamond Jubilee celebration I need to savour the event. I gave my thanks with the people at St Paul’s Cathedral.

At Buckingham Palace, I came out with the Royal family, as soon as I opened the door there was an uproar of cheers. The question that came to me was: How many people are there? There was a blur of blue, white
and red, all cheering for me. Then I heard aeroplanes in the air, there were three of them! That was a trip down memory lane when my dad refused to move the royal family away from London. I saw the relentless bombing from the fighter planes.

The weather didn’t spoil my special weekend despite the dreadful rain. What did upset me was that Philip wasn’t here to celebrate some of the events with me during my Diamond Jubilee weekend.

I attended the Floatilla Paegent down the themes on the 4th June 2012. I decided to wear a 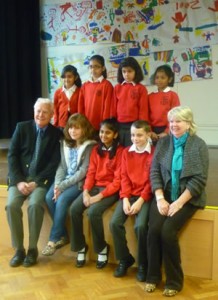 sparkling white dress with diminutive white swarvoski crystals dotted here and there. I had a white hat to match and a fluffy white shawl. To travel down the Thames, I journeyed in the Royal Barge. Travelling with me were my loyal companion (no, not the corgis) Prince Philip, Prince Charles and his wife, the Duchess of Cornwall, Camilla and the Duke and Duchess of Cambridge – William and Kate.

Standing on my barge for four hours was hard-going but I wanted to show the public that I wasn’t there to lounge about. I was there to watch the boats, to see all my patriotic fans and to show the Commonwealth that I care. After an hour, a bitter wind started tickling the river. The Thames then became very choppy. Sadly, it started to drizzle but no-one was going to give up. Halfway through, I went underneath the deck of the barge for a cup of tea, a quick cucumber sandwich and a scone – maybe two! When I got back on the deck, I carried on waving and smiling showing the crowds my appreciation towards them. By now, it was starting to rain more heavily. Typical British weather!

Laughter was erupting on the barge just like the roaring from the crowds . Slowly, each boat edged closer to Tower Bridge. I stared up the river at all the boats that were actually there. I thought how my ancestor (Queen Victoria) must have felt when she celebrated her Diamond Jubilee. Humbled maybe, proud, jubilous, wonderfully happy. I am so lucky to be the second longest reigning monarch. I am always wondering if I will be the longest reigning monarch. Hopefully my family and everyone will remember the few celebratory days. I felt so alive but then disaster struck.

Prince Philip was taken into hospital with an infection. Sadly, he then couldn’t attend the fly past, the concert or the Thanksgiving Service at St Pauls with the visit to the Lord Mayors Mansion after. When I wasn’t busy, I would visit him at St Edward\s Hospital in London. When he was allowed to come home again, I felt that the weight of the entire universe was lifted off my shoulders. He was in time for his own ninety first birthday. My family and I were thrilled about his recovery. He had been in a dreadful state but now he is his normal lively self. Though my Diamond Jubilee is over I may even have another one someday. Hopefully!